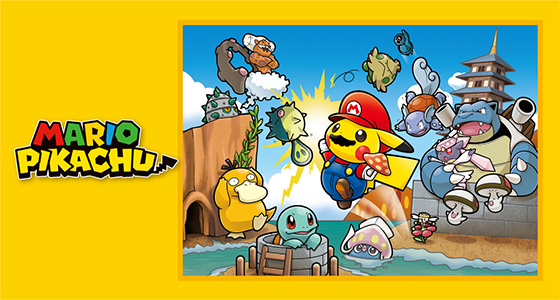 Over the years, there has been many collaborations between the Pokémon series and some third-party IPs. But the collaboration announced today is bound to appeal to many a Nintendo fans: it’s with Mario!

The following will be available at the Pokémon Center stores from October 29th:

Today, The Pokémon Company uploaded a music video for Mimikyu, one of the Pokémon introduced in Pokémon Sun and Moon. It features some actual gameplay footage from the game, as you can see for yourself:

Talking of Mimikyu, it was announced today that Snow (an app providing animated stickers to be used on selfied) would be getting some Mimikyu stickers next week (on October 25th). We don’t know anything else about them (such as the price), just that they will be available for a limited time.

Talking of Pokémon Sun and Moon, here’s some additional screenshots courtesy of Dengeki:

A quick reminder for players in Europe and North America: you have until Monday to get Keldeo for Pokémon X, Y, Omega Ruby, and Alpha Sapphire, via the Nintendo Network. To get it, simply launch the game while being connected to the internet, then chose: Mystery Gift > Receive Gift > Get Via Internet.

Also, if you participated in the Unova Classic Battle Competition, you have until Monday to get your Darmaritan (based on N’s Darmaritan in Pokémon Black and White (2). Head over to the Pokémon Global Link to find out how to get it!

Here’s the preview for the next episode of the Pokémon XY & Z anime series, airing on October 27th in Japan: