The latest official blog post for Phoenix Wright: Ace Attorney Trilogy is actually a message from the one and only Shu Takumi, creator of the series and original planner, scenario writer, and director of the first three Ace Attorney games. He came to discuss how the series came to be, nearly 20 years ago (back in 2001): click here to read what he had to say!

The idea to make a game about a lawyer fighting in a court of law first took shape in a game proposal doc I wrote in the summer of 2000. There were no courtroom-based games at the time, so it was very hard to convey to others what it would actually play like. When I first presented the game’s concept to the higher ups in the company, I received a lot of negative comments like, “This game seems hard and unforgiving. Are you sure players will take to this?” and “Won’t players need some legal knowledge just to play?” But the point of the game wasn’t “the law” or even “reality”. Instead, I imagined a game where the point was to have fun solving puzzles and enjoy the excitement of calling witnesses out in their lies with evidence. I imagined the courtroom to be like a huge colosseum where the crowds above would loudly cheer on the verbal gladiators below.

Here’s the latest screenshot for Umihara Kawase Fresh!, and the first one in English! 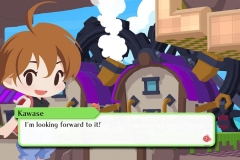 Here’s one lone screenshot for Vaporum: 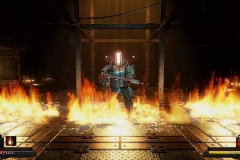 Vaporum (Switch – eShop) comes out on April 11th in Europe and North America.

Super Crush KO (Switch – eShop) does not have a release date yet.

Here’s a video clip for Treasure Stack, which showcases one of the new features from Ver. 1.0.2 of the game: