Ninja Box (Switch) does not have a release date yet.

NIS America have shared some more footage and details for Neo Atlas 1469:

Establish trade routes and determine which goods will bring the greatest profit. Food, precious metals, livestock…even toys are game! Combine goods to make a new commodity. These goods bring in more revenue, so get to it! For example, combining grapes and barrels creates wine, which can be used to trade for even more goods!

However, pirates patrol the seas, aiming to swipe these goods for themselves. Deploy admirals to challenge them, but it’s crucial to choose battles wisely! Defeat at the hands of the pirates will set you back with repair costs and plundered ships! Here’s a tip: Baldi starts with high battle power, so early clashes will be a breeze. Victory ensures the trade route will continue to sea see another day!

And here’s one more screenshot: 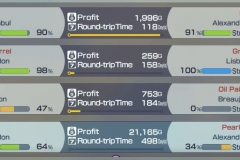 The latest issue of Jump magazine, to be released this Monday in Japan, will reveal that Son Goku from Dragon Ball GT is coming to Dragon Ball FighterZ as DLC fighter. Unfortunately, we don’t know when exactly, but no doubt Bandai-Namco will share some details next week once the magazine is out.

Angry Mob Games have announced that the Ver. 2.0.0 update for Brawlout will be released on May 21st. Here’s a video clip for it, showcasing Dead Cells as playable character:

Here’s the latest video clip for NBA 2K Playgrounds 2, showcasing the Court Packs (that allow you to customise the playground):

Here’s an unboxing video for the Limited Edition of Owlboy, from Soedesco:

The latest translated interview from shmuplations is a fairly lengthy interview of Koji Igarashi, about Castlevania: Aria of Sorrow (originally published in Nintendo Dream). Click here to check it out!

—Why did you choose the GBA hardware?

IGA: Partly is’s because Circle of the Moon sold very well for the GBA, and before that I had guessed that this would be the era of the GBA. Those were the main two reasons. In today’s world, if you try to release a 2D game on something like the PS2, it’s going to get lower ratings (compared with 3D titles). The hardcore fans still love 2D, but to the general market, it’s seen as something “lesser” than 3D, unfortunately. Symphony of the Night was a Playstation game, and many wanted to see a sequel for the PS2, but it turns out that making a 2D game for the PS2 is more difficult than you might think.

For the GBA, on the other hand, 2D is the standard assumption, and graphically it has similar capabilities to the Super Famicom, and the scale of the development isn’t too unwieldy. It’s nice, because a game released on the GBA gets reviewed and appreciated fairly as a 2D game. So yeah, taking all that into account, I can’t imagine making a 2D game on a different system. And I love 2D games, personally.

Here’s the latest and most likely final video for A-set, the mysterious net idol seemingly related to AI: The Somnium Files:

It looks like we can expect some sort of announcement at the Game Developer Conference 2019 next week!