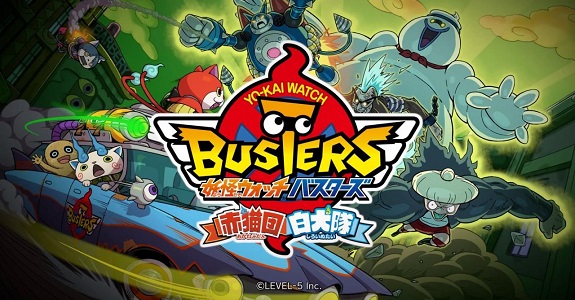 Today, Bandai-Namco announced their latest Nintendo Switch game, and for once, it’s not a port! The new game is Pro Yakyuu Famista Evolution, the latest entry in the Pro Yakyuu Famista series. It will be released on August 2th in Japan, and will cost 6 100 Yen + taxes (retail and on the Nintendo eShop).

The game will feature over 1 000 players (more than the previous game, Pro Yakyuu Famista Climax), with their actual name (under licence of the Nippon Professional Baseball. It features several game modes, such as Dream Pennant, Online Battle, Famista Fantasy and Board de Famista. Motion controls are included, allowing players to pitch and bat using them.

Pro Yakyuu Famista Evolution (Switch) comes out on August 2nd in Japan. The Upcoming Games page has been updated!

Earlier this year, we learned that Yo-kai Watch Busters would be released on April 19th in South Korea. We assumed that the game would be announced for Europe and North America before that date, but so far, there hasn’t been any announcement. And yet, it looks like a western release is still in the works.

Indeed, Nintendo of America is credited for “Localization”, in the “Localization and Other Support” section of the credits. Unfortunately, no further details are available (not even a list of people who did work on the localisation), so the full extent of Nintendo of America’s work on the game remains unclear. Hopefully, Nintendo and/or Level-5 make an announcement before/at E3 2018!

Source: Yo-kai Watch ES (Twitter)
Thanks WonderLuigi for the heads up!

It’s been a while since we last heard about Kunio-kun: The World Classics Collection (known in Japan as Kunio-Kun Nekketsu Complete Famicom Collection), but today, Arc System Works had some good news for fans of the most hot-blooded of video game heroes: the collection is going to include 3 additional games, bringing the total to 18. Unfortunately, we don’t know what those 3 additional titles are!

Here’s the recording of the latest Inti Creates livestream, which is about Gal Gun 2!

All orders for those games should be shipped by August!

Here’s an off-screen screenshot of the Toki remaster on Nintendo Switch, and more precisely a WIP version of Level 1:

Toki (Switch) does not have a release date yet.

Here’s the preview for the 4th episode of the Layton Mystery Agency ~Katrielle’s Mystery Files~ anime series, airing this Sunday in Japan: