Today, we have a few screenshots for Phoenix Wright: Ace Attorney – Spirit of Justice (for Revisualisation), a blog post, and some pictures for the Mystery Rally!

The Revisualisation system kicks in at the end of court segments. Basically, it’s a system that allows you to review the facts learned during the investigation and the court segments, and find a “route” to the truth. You are presented with a series of questions, and you have to find the right answers using everything you have learned, in order to reach a logical conclusion. If you’ve picked the right answer, you will “move forward” toward the next question.

Here’s the latest batch of screenshots:

This week, the official blog for Phoenix Wright: Ace Attorney – Spirit of Justice was launched. New blog posts will be added every Monday and Thursday, but we don’t know for how long. Today’s blog post is from Takeshi Yamazaki (Director), who talked about how he came up with the theme of the game. Thanks to Ash, we have a translation of the blog post to read (you can check out the “raw” translation at the source link below!).

Naturally, none of these themes were any good.  So when Motohide Eshiro (Producer) came, a rather amusing conversation took place (obviously fictionalised!):

After some more thinking and discussions, they came up with “The revolution of the court” as the theme. But at the meeting where it was announced, Takeshi Yamazaki wasn’t quite able to explain what it would be about. He further clarified it, explaining that it meant “the suppressed weak defeat the strong” for him.

He explained that a revolution was, in a way, a kind of grand turnabout. Obviously, they needed a confrontation to go with that theme, but since things were quite vague back then, they ended up with the following piece of concept-art: 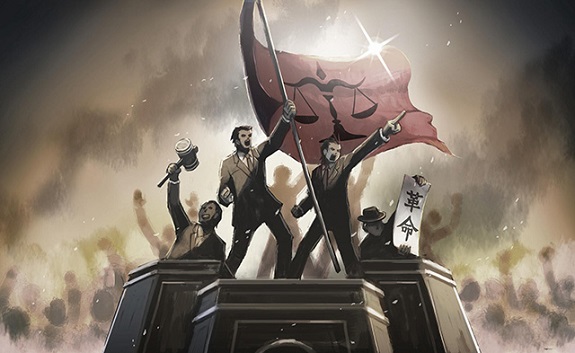 “OUR REVOLUTION WILL START NOW”

With the help of the team, Takeshi Yamazaki and Motohide Eshiro eventually came up with Khurai’n, and the dual-protagonist story.

The next blog post will be by the planner, Mr. Daigo.

Capcom also shared pictures of some of the goodies from the Limited Edition, such as the packaging of the drama CD, and the postcards. There’s also a special campaign: fans who buy the Limited Edition will automatically be entered in a lottery to win autographs by the Drama CD cast (same VA as the games).

Finally, here’s some pictures for the Mystery Rally announced last week, including pics of the goodies you can get by participating:

Phoenix Wright: Ace Attorney – Spirit of Justice (3DS) comes out on June 9th in Japan, and in September in Europe and North America.