Today, Monolith Software once again updated their official website for Xenoblade Chronicles X, and this week, there’s quite a lot of goodies to discover! For starters, there’s a brand new soundtrack preview, that you can download by right clicking > saving as this link.

There’s also some brand new artworks, from the front page of the website. One of them show a character called Serika, seen in the Battle presentation, last week (and rumoured to be a party member).

This week, there’s a brand new video, which shows the battle system in action (with another soundtrack preview):

The official website was updated with some picture for the arm companies (which produce the equipment you buy and use in the game; the more you buy and use their products, the more efficient they become at producing equipment):

We now have some concept-art for weapons, by Mr. Katagai: 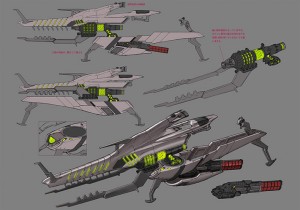 Some races are showcased:

– Nopon: they’re natives from planet Mira, you can do business with them at the caravan;
– Ma Non: an alien race with really advanced technology. They’re pacifists.
– Baias: they’re hostile to Humanity, and they’re one of the main enemies in the game.

Finally, there’s the second part of the short story about B.L.A.D.E.: click here to read it (only in Japanese).