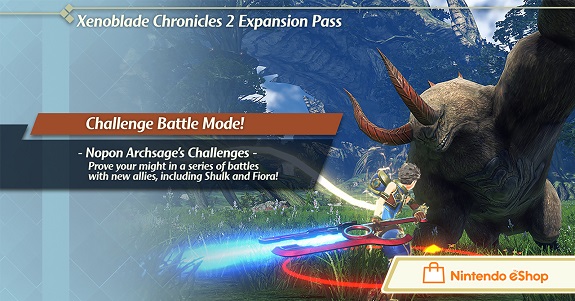 On November 14th 2017, the official website of Xenoblade Chronicles 2 was updated in Japan, adding a new section: Production Notes. It’s a blog-like section, where members of the development team will come discuss various aspects of the game.

The latest blog post for Xenoblade Chronicles 2 isn’t from Tetsuya Takahashi, but instead Monopon… also known as the one and only Nopon employee at Monolith Soft. He took the effort to learn Japanese in order to make sure even people unfamiliar with Noponese can understand him! He’s there to talk about the Challenge Battle Mode, that will be added later today (North America) / tomorrow (North America, Europe, and Japan).

As detailed in this post, Challenge Battle Mode is all about tackling a series of challenges, with waves of tough enemies to defeat in order to earn some rewards. Rex and co. travel to some sort of alternate world, where they end up meeting Shulk and Fiora from Xenoblade Chronicles. Naturally, he decides to help them return to their original world.

It’s Kunihiro Tanaka who redesigned Shulk and Fiora for this Challenge Battle Mode, where they appear as Rare Blades that can be assigned to pretty much any character, like any other regular Blade (with the exception of Tora). They are voiced by Shintarou Asanuma and Eri Nakao respectively.

By the way, Monopon confirms that you can only battle with Shulk and Fiora in the Challenge Battle Mode. It’s a bit disappointing, but there’s nothing you can do… Well, actually, that’s not true. If you get yourself a specific reward, you will be able to bring Shulk and Fiora with you to Alrest! Unfortunately, we don’t know if they get their own sets of Blade Quests or not.

Looking to unlock Shulk and Fiora for the main game? Click here!

To take up a Challenge, you have to talk to the Nopon Archsage. Each one has its own set of conditions (time limit, level cap, whether Blade Powers are allowed or not, etc.). If your characters are overleveled, their level will be lowered accordingly… but if they’re underleveled, it doesn’t look like their level will be boosted for the duration of the Challenge.

Players looking for intense challenges can rejoice: Monopon also reveals that additional (even harder) difficulty levels will be added at a later date.

Right now, it’s not clear whether you can get all the rewards simply by completing the Challenges on Easy, or if you also need to do them on Normal / Hard. We also don’t know if there’s a special reward for completing all the Challenges, and on all difficult levels. One thing’s for sure, though: completionists will have fun trying to complete all the various Challenges on the diffierent difficulty levels!

The Challenges have you battle a wide variety of enemies, ranging from small fry to big monsters, but also past bosses from the main game. Enemies come in waves, so you can’t dilly-dally: you have to defeat them all as fast as possible, or you will quickly find yourself overwhelmed. You will also need to think carefully about the order to defeat enemies in (especially important for bosses or really powerful monsters).

When you defeat enemies, they drop items called Ether Cubes. Depending on the amount you collect during the Challenge, you will get a certain number of treasure chests once you’ve completed it. You can unlock up to three treasure chests per Challenge, and you can actually see the chests being filled up as you pick up Eather Cubes during battles (no surprise at the end!).

But Challenge Battle Mode isn’t about challenging battles. You can also find yourself in “impossible situations”, such as that Challenge that has you play as Jin “infiltrating” an Ardainian battleship and slaughtering poor soldiers by the dozens. In this particular mission, you have to defeat 100 soldiers within the time limit.

This specific Challenge allows you to get an early taste of the story DLC, Xenoblade Chronicles 2: Torna~The Golden Country, releasing in September.

As mentioned yesterday, not all Challenges are available from the start: more and more Challenges unlock as you progress through the game. This confirms that the Challenge Battle Mode is unlocked right away, and can be accessed as soon as you reach the Oltethro Playhouse in the Kingdom of Uraya. Also, some of the Challenges require specific unique monsters to be defeated first in order to be unlocked.

Defeating enemies during a Challenge allows you to earn Ether Cubes. Collecting those allow you to “fill up” treasure chests in order to unlock them. And in those treasure chests, you will find various treasures, including a key item called “Nopon Stone”. If you bring those to the Archsage’ Orderly, you can trade them for special items that change the appearance of characters (basically, costumes!).

Those costumes are for all characters, not just Blades. They do take an Aux Core slot for Blades, though (and most likely an Accessory slot for Drivers).

Here’s some of the costumes you can unlock:

Finally, here’s some more screenshots for the Battle Challenge Mode in Xenoblade Chronicles 2:

For more details about the DLC and Expansion Pass for Xenoblade Chronicles, make sure to check out this page! Also, the Software Updates page is this way!