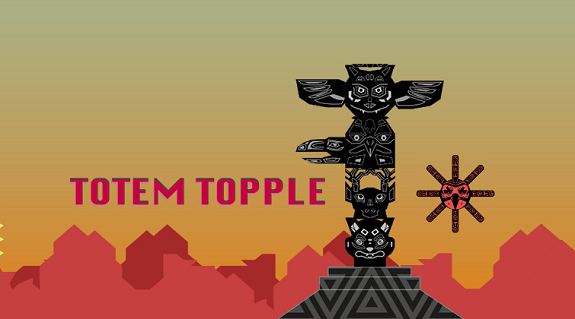 Totem Topple is a rather surprising tower-defense game where you manage an actual tower (well, it’s actually a totem…), and it came out last year on Wii U (via the Nintendo eShop). Unfortunately for its developers, the game was not a critical success, and sales were also poor.

And following the game’s launch, they certainly were disappointed by all this. That being said, they still took a good laugh at feedback from players, in order to see what was wrong with the game and what they could do to “rescue it”. You can check out this post to learn about everything they did to try and achieve that.

Here’s the latest trailer for the game, showcasing the Ver. 2.0 of Totem Topple:

Here’s the changelog for the update (to be found right after the break!):

– Second player can join in, targeting enemies using a Wii Remote
– In off-screen mode, players can target enemies by tapping on them on touch screen

– Fire/Water/Ice type enemies added. Enemies take more or less damage depending on their type and what type of arrow is fired at them.
– All turrets will shoot same damage type. Player can change that damage type a limited number of times in a given time period.

– Totem pole can be set on fire or frozen by fire or ice boss enemies respectively
– Fire does damage over time and can spread
– Frozen heads take damage over time. Frozen beaks do not fire

– Adjusted hitboxes of enemies and arrows. Arrows no longer appear to pass through enemies
– Enemy spawn positions adjusted so that enemies aren’t killed off screen, nor spawn inside tower nor spawn near base of tower (giving player little chance of defeating them)
– Limit to number of heads. Players weren’t understanding why they were spawning super hard enemies when they went over 10 heads before, so took out super-hard enemies and just added in a hard limit on how high the totem pole can be at any one time

– Damage and Rate of fire adjusted so that difference between high and low rates are clearer to players
– Economy rebalanced
– Enemy difficulty, spawn groups, and spawn rates rebalanced

– Indicators for which heads/wings are applying what bonuses
– Higher rate of fire leads to arrows also moving faster and have “go-faster stripes” come out the back of them
– When arrow is fired that does zero damage, it breaks in mid air to indicate such
– High damage arrows are more brightly coloured
– Colour of arrow or wing/beak reflects damage type being fired
– Arrows with super-high damage produce fire/ice/water trails depending on damage type