With less than month until release (September 10th in Japan, September 11th in Europe and North America), Nintendo launched Today’s Super Mario Maker last week: every day, the company is going to highlight a particular element from the game, via videos, screenshots, etc..

For Today’s Super Mario Maker, Nintendo has uploaded some additional TV commercials for the game. Unlike yesterday’s CMs, those focus on the “Play” aspect of Super Mario Maker, where you try to go through levels created by your friends or other players. They feature Bakarhythm, a well-know artist in Japan.

Here’s the TV commercials (second one is after the break!):

But that’s not all! Nintendo also announced that Super Mario Maker would also be playable on September 5-6 and September 12-13 in Japan, during special demo events at select Yodobashi and Bic Camera stores (click here to know which ones). During the first session (September 5-6), players will be able to try out a level created by Bakarhythm, which makes an appearance in the commercials above. 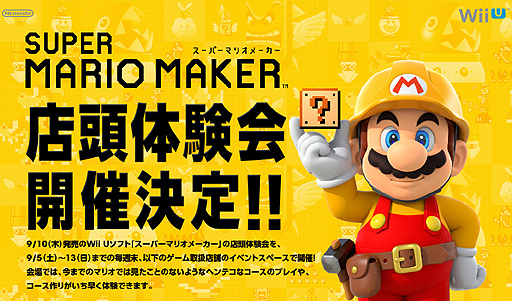 Super Mario Maker (Wii U) comes out on September 10th in Japan, and September 11th in Europe and North America.