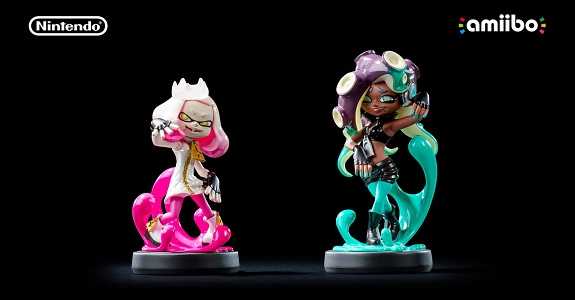 The first one is something that pretty much any Splatoon fan had seen coming: Pearl and Marina amiibo! Unfortunately, we don’t know when they will be released: that’s something that will be announced at a later date. But what we do know is that you will be able to use the amiibo to take pictures with Pearl or Marina (like you can with the other Splatoon amiibo), and you will be able to get special gear with it.

It looks like in North America, the amiibo will be sold as double-pack.

Here’s the promo video for the Pearl and Marina amiibo:

But that’s not all: it was also announced that an upcoming update would add a new stage and a new weapon. The stage is called “Goby Arena”, and looks like a sports stadium. As for the new weapon, it’s called Dark Tetra Dualies. Unlike regular Dualies, they allow you to make 4 consecutive rolls, and you can even shoot while rolling!

We don’t know when the new map and weapon will be added to the game, but keep an eye out on the Content Updates page for Splatoon 2 to keep up to date!