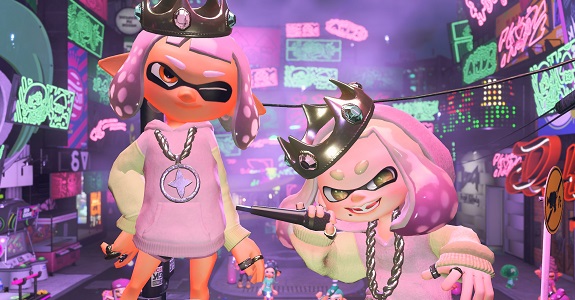 Today, the Squid Research Lab shared its latest report, which happens to be about the Pearl and Marina amiibo releasing next week (on July 13th) worldwide.

However, there are some differences with the other Splatoon amiibo figures. First, the gear you can unlock with them: it’s based on their outfit from the Octo Expansion. Just like the other figures, you need to take part into a certain amount of battles in order to unlock Headgear, Clothing, and Shoes, one at a time.

As for the photo shoot feature, you can choose to have Pearl and Marina wear either their stage outfit, or their clothes from the Octo Expansion. But that’s not all: you can also choose to take pictures at the Inkopolis Square in its Splatfest version… on the actual stage used by Off The Hook during their concerts! This will allow you to re-discover the Inkopolis Square, and see it from a completely different angle.

Finally, the Pearl and Marina amiibo do not unlock new songs for Squid Beatz 2, unfortunately. However, they do add two new modes: the Pearl Mode and the Marina Mode. The songs are the same, but the appearance of the mini-game changes when using those two modes. Also, you get different sound effects! Of course, you can switch from regular to Pearl / Marina Modes at any time.

Here’s footage of the Pearl and Marina Modes for Squid Beats 2:

The Pearl and Marina amiibo (Splatoon 2) come out on July 13th worldwide.