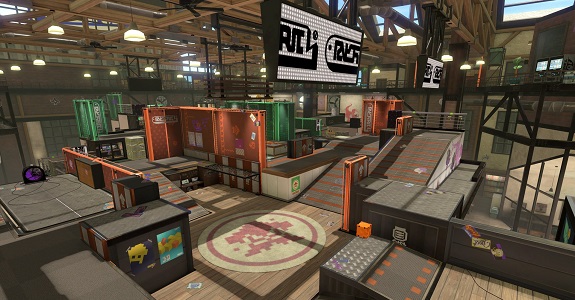 Today, Nintendo announced that the next Software update for Splatoon 2, Ver. 3.2.0, will be released later today in North America / early tomorrow in Europe and North America. As usual, it will add some new and returning weapons, as well as a new or returning stage, that will become available a couple of weeks after the Software update, via the new weapon / stage update.

Ancho-V Games first appeared in the original Splatoon, and like other returning stages, it’s slightly different in Splatoon 2. As you probably already know, this stage is located in the very building where the developers of Squid Beatz work. Since the number of staff members had increased, they had to expand to the building next door, and it looks like Inklings didn’t wait long before making that expansion part of their battle space!

Now, on to the new weapons. The first one is the Nautilus 47, and it’s a Splatling-type weapon. But it’s not just any old Splatling… it’s the very first one that allows you to keep the charge! That way, you can safely charge your shots from a safe place, then move closer to the enemy and unleash the ink at them pretty swiftly. The austere tin texture, the various functions… this is definitely a great weapon for weapomaniacs!

The second one is called the Bloblobber. It’s a new type of Slosher, that throws foamy ink instead the usual, liquid ink. As you can see in the video below, the bubbles bounce around when hitting the ground and the various obstacles (walls, etc.), making their trajectory rather unpredictable.

The possibilities for this weapon are quite interesting. For example, you can pull off nice trick shots by having the bubbles bounce off walls. You’re definitely going to become wary of corridor-like areas when a member of the opposing team is using the Bloblobber!

Here’s two video clips showing the Nautilus 47 and the Bloblobber in action:

The Ancho-V Games stage and the two new weapons will go live on July 31st (North America) / August 1st (Europe, Japan), with the monthly stage and weapon update. Make sure to check out the Content Updates page to keep up to date with all that’s added to Splatoon 2!