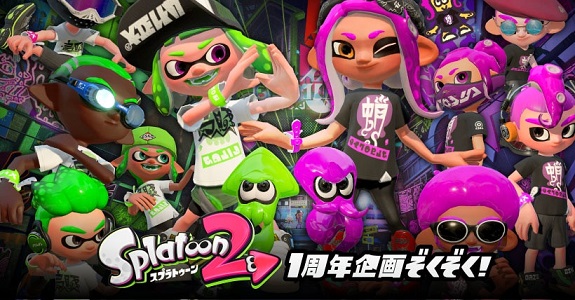 Splatoon 2 was released on July 21st 2017, which means that in a few weeks, it will be celebrating its 1st Anniversary. And in order to celebrate that very anniversary, Nintendo has prepare various events in Japan!

The first one is actually global: the next Splatfest is a Global One, and the theme is Team Squid vs Team Octopus. You can find more details about it on the dedicated Splatfest page!

The second event is Japan-only: it’s the Splatoon Exhibition at Tower Records, at the SpaceHACHIKAI (located on the 8th floor of the Tower Records store in Shibuya). There, various things will be on display, including various pieces of concept art for Splatoon, Splatoon 2, and the Octo Expansion, but also a 15m wide chronology of the Inkling History, and more.

Finally, the third “event” is actually a “new” Nintendo Switch bundle… which is in fact the same bundle released last year, but with a ticket offering free Nintendo Switch Online subscription for 90 days (personal, not family plan). It will be released on July 13th, and will cost 35 960 Yen + taxes.