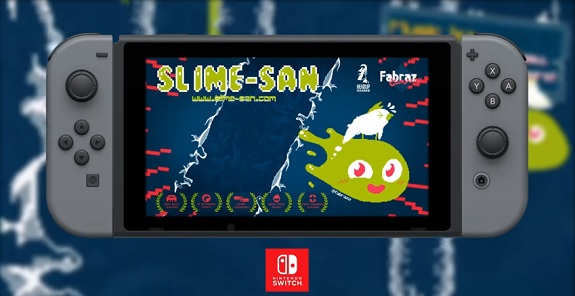 Looking for some intense platforming action on Nintendo Switch? Then Slime-san is probably the game for you! Developed by Fabraz (developers of Cannon Crash and Planet Diver), it offers no less than 100 levels, found in unique 5-coloured pixelated world. Your goal? Escape from the innards of a giant worm.

You get to play as Slime-san, who was simply being his usual, slimy self in a peaceful forest when one day, a giant worm appeared and gobbled him up without even asking him if he wanted to be gobbled up in the first place. Not very nice of you, Mr Worm! Naturally, Slime-san doesn’t have much of a choice: to avoid getting digested, he has to climb his way out through the intestines and out the mouth of the worm.

The game has a place called Slumptown, a town full of survivors also located in the innards of the giant worm. There, you can purchase different play styles, outfits, shaders, and even some multiplayer mini-games. Those can be played in local multiplayer, with one set of Joy-Cons! And speaking of the Nintendo Switch, this version offers HD Rumble functionality, allowing you to really feel the impact of your slimy jumps!

Here’s a trailer for Slime-san:

And here’s the main features of the game:

Slime-san (Swich – eShop) will be released on August 3rd in Europe and North America. The Upcoming Releases page has been updated!