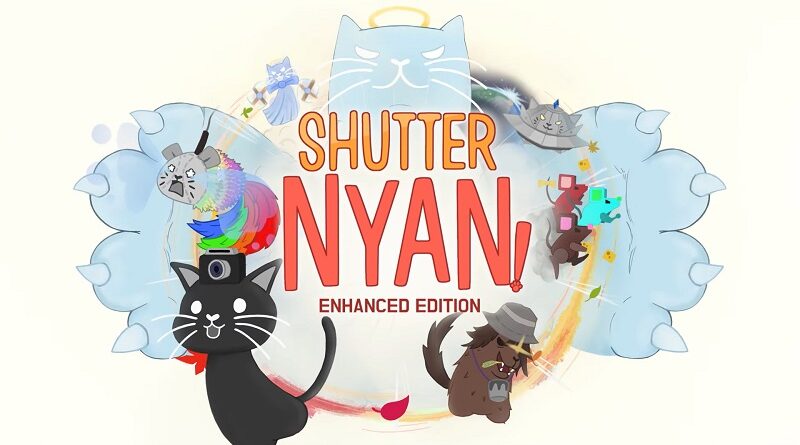 The latest game from CFK on Nintendo Switch is a 2D side-scrolling action game called Shutter Nyan! Enhanced Edition, developed by Project Moreum. Ahead of the October release, CFK have shared some additional details about the game, focusing on the story and the gameplay.

Let’s start with the story details:

● The Journey of A Cat to Return to the Dear Friend

One day, a cat found its friend feeling blue. Walking towards the friend to comfort her, the cat was suddenly swept away by strong wind, to the world it has never seen. The cat, stranded alone in the mysterious place, soon discovered that the girl has lost her camera. So begins the cat’s journey to return the camera and the smile for its dear and precious friend…….

As the title indicates, Shutter Nyan! Enhanced Edition’s gameplay is centered around a camera that allows you to “capture” object and use them creatively to cross various levels:

While Shutter Nyan! Enhanced Edition stands out for its emotional story and art style, its unique and creative camera action is also noteworthy. The player can use various objects captured with a camera to creatively overcome the obstacles ahead, which includes making a bridge in the air and knocking down enemies that stand in the way.

The camera truly is a central element of the game, influencing both the gameplay and the story. By collecting photographs, you can uncover the story of the cat and its friend:

The camera, containing various fond memories of the cat and its friend, has been damaged when it fell to the ground. The player must follow the trails of the cat’s memory and recover the damaged photos with correct items found throughout the mysterious world. As the photos are recovered one by one, the player may discover what happened between the cat and its friend, as well as a clue to go back to where the friend is.

Find and gather right items to recover the damaged photograph.

And just like many such platformers, Shutter Nyan! Enhanced Edition will features collectibles:

Last but not least, collecting special posters throughout the world may grant them a good reward. Make sure to capture every one of them as you explore various parts of the stage!

Finally, CFK confirms that the game will feature bosses, and those aren’t there just to provide challenge: they also have their own stories with the cat!

● Use the Power of the Camera to Challenge Fearsome Foes!

The player will face a boss at the end of each stage. The bosses will try to corner them with fearsome attacks or map features, but the player can dodge these threats and even counterattack using the power of the magical camera. As each boss is somehow related to the cat, it will be another fun to find out what happened between the boss and the cat in the past.

And here’s a trailer and some additional details:

In Shutter Nyan! Enhanced Edition, the player will be a cat that has been stranded alone in the mysterious world. As the cat finds a way back home, it must overcome a variety of dangers and obstacles using the magical camera’s power to copy and paste objects.

Shutter Nyan! Enhanced Edition (Switch – eShop) does not have a release date yet, but is slated for an October release worldwide.