Puzzle & Dragons Super Mario Bros. Edition comes out in less than a week in Japan, and the (regular) demo version is available since Wednesday. Japanese users can also pre-load the game right now, so as to be able to play the game as soon as possible the day it comes out (on April 29th). Pre-loading should be available in North America on May 15th (if Nintendo of America follows the same pattern as in Japan), and May 1st in Europe. 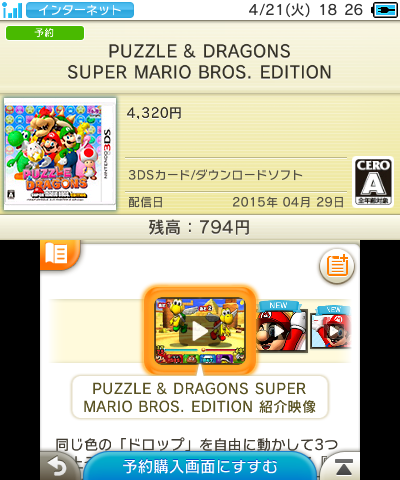 And while fans wait for the game to come out, Dengeki Online uploaded a gameplay video for it earlier today. It shows the first four levels of the game, including the boss Battle.

And finally, a special offer from the Official Nintendo UK Webstore. If you buy the game from them, you can get a free Mario plushie:

Puzzle & Dragons Super Mario Bros. Edition (3DS) comes out on April 29th in Japan, May 8th in Europe and May 22nd in North America. In the west, the game will come in a bundle with Puzzle & Dragons Z. The demo is already available in Japan and Europe.