Today’s Pokémon news: Pokémon Duel to be discontinued on October 31st, but also…

It has been announced that Pokémon Duel will be discontinued on October 31st. After that date, the game will not longer be playable, and only a few features will be available (such as the Library, as well as the possibility to ask for a refund for any Diamonds left unused).

Starting today, Diamonds are no longer available for purchase, just like the Player Pass. If you had set auto-renewal for it, it has been cancelled and you will not be charged next month. The Monthly Ranking will be disabled on August 26th.

Some other “bonuses” are live, such as:

As usual, you can find more details about the various Software updates for Pokémon Duel on this page.

The Pokémon Company opened pre-registration for Pokémon Masters on Android and iOS, with release still planned for this Summer worldwide (by August 29th to be precise):

Also, a preview version of the game has been released on Android devices in Singapore, and will be coming soon to Canada. It allows players to enjoy select content from the game, and then carry over their progress to the final version of the game later on.

The Pokémon Company have shared no less than 6 videos for the game, showcasing its various elements/gameplay mechanic and teaching players how to play:

A Gym Leader with a fiery, brave personality, Flannery can be a bit too serious and sometimes tries too hard to conduct herself properly. 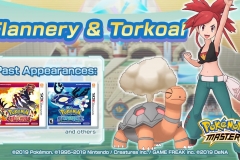 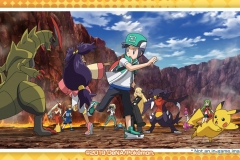 Earlier this week, Pokémon Rumble Rush was finally released on iOS devices, following its release on Android a few weeks ago.