Here’s the latest set of details and picture for Pokémon Masters:

Trainers in Pasio use a device called a Poryphone to access information. It’s a necessary tool containing a wide range of useful features! 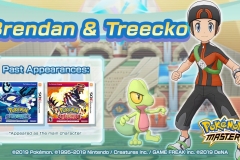 Brendan’s goal is to be like his dad, Norman—a Gym Leader he admires. He is a bit mischievous, but he is serious about Pokémon battles.

Heads up for Pokémon GO players: the new appraisal system, as well as the new Trainer Battle minigames are now live!

On July 25th/26th, a new Software update for Pokémon Duel will be released. It will bring the game to Ver. 3.0.14 , with the following game balance adjustments:

Today, it was announced that Timi (a Tencent company) is currently working on an unnamed Pokémon game for unspecified platforms (most likely mobile platforms). Unfortunately, that’s all we know for now…