Today’s Daily news: delay and making of video for Blacksad: Under the Skin, but also…

Microids have announced that Blacksad: Under the Skin has been delayed to November 5th, giving the developers more time to polish the game and making sure it’s of the highest quality when it does come out.

A first making of video was also shared:

This video series shot during the development of the game will introduce viewers to the team behind the video game but also both the writer and the artist behind the original Blacksad comic book: Juan Díaz Canales and Juanjo Guarnido. Dive headfirst in the Blacksad 50’s film noir universe to learn how Pendulo Studios managed to give birth to this comic book masterpiece and how this original adventure came to fruition. Discover unreleased documents, exclusive images of the characters’ creation and meet the international crew working on the project.

Blacksad: Under the Skin (Switch) comes out on November 5th in Europe and North America. The Upcoming Games page has been updated!

Team17 have shared a brand new trailer for Yooka-Laylee and the Impossible Lair, showcasing the alternate level states:

In Yooka-Laylee and the Impossible Lair, players must rescue members of Queen Phoebee’s Royal Beettalion from Capital B in a quest to take on his most dastardly challenge yet – the Impossible Lair. Players will explore a charming 3D overworld to uncover 20 different 2.5D levels, each with a member of the Royal Beettalion to rescue. However, there’s more! As the colourful duo traverse through the overworld, Yooka and Laylee will discover new secrets and puzzles which can dynamically transform each level, increasing the total number of levels to 40! Spark some change by hooking up electricity, flood chapters with running water or literally flip them upside down for radically altered challenges. 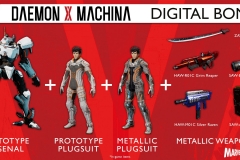 And here’s the recording of the Future of Digmon panel at Anime Expo 2019:

Here’s the latest video for Minecraft, introducing one of the co-hosts of the upcoming Minecon Live livestream: