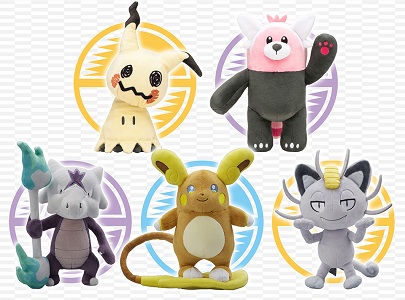 Yesterday, Niantic announced that Pokémon GO was now available in the following countries:

Speaking of Pokémon GO in India, Niantic has announced a partnership with Reliance Jio Infocomm. All 3,000 Jio stores and partner locations have become PokéStops and Gyms!

In July, the latest Pokémon movie (Pokémon The Movie 2017) will open in Japan. And just like every year, the very first preview will be shown during the Oha Suta TV show tomorrow (December 15th), at 7.05AM JST. As usual, the full trailer will then be uploaded on YouTube by The Pokémon Company, a few hours later.

Starting next week (December 23rd to be more precise), some Pokémon Sun and Moon plushies will be available at Pokémon Center stores across Japan.

Speaking of Pokémon Center, the Holiday 2016 Collection is still available on the Pokémon Center Online website (United States): click here to chekc it out!

Yesterday, The Pokémon Company announced that the latest expansion for the Pokémon Trading Card Game, the Sun & Moon Series, will launch on October 3rd in the west. It will feature the following:

Today, The Pokémon Company uploaded the 3rd episode of their Pokémon Puppet Show. Here it is:

Here’s the preview for the next episode of Pika-Chan, The Pokémon Company’s webshow about battles in Pokémon games:

Here’s the preview for the latest episode of Pokémon no Uchi Atsumaru?!, airing on Sunday in Japan: