Yesterday, leaked scans from CoroCoro magazine allowed us to discover a brand new Pokémon, called Magiana. It’s quite different from other Pokémon, as it has a metallic body, and was actually man made. Magiana and Volcanion will star in the latest Pokémon movie, Pokémon The Movie: Volcanion and the Ingenious Magiana, which hits theatres in July in Japan.

Here’s an updated synopsis of the movie frim CoroCoro magazine:

As Ash and his friends continue their journey, Volcanion drops down from the sky in front of them. Volcanion’s object is to recover Magiana, who has been abducted by the “Azoth Kingdom”, a city of super-machinery. However, Volcanion and Ash have become linked together by a strange (?????). Will the two of them manage to work together and save Magiana?

Here’s another poster for the movie, which shows Volcanion and Magiana, Satoshi/Ash, Ash-Greninja, and of course Pikachu:

If you live in France, you will have to wait a bit longer before being able to get a Mew for your copy of Pokémon X / Y / Omega Ruby / Alpha Sapphire. Yesterday, it was announced that the distribution would only start on February 26th, and would last until March 31st. Unfortunately, we don’t know why the distribution is “delayed” in that particular country, but if you really cannot wait, don’t forget that a code from anywhere in Europe will work for you!

Here’s a password to unlock Zygarde 10% Forme in Pokémon Picross: 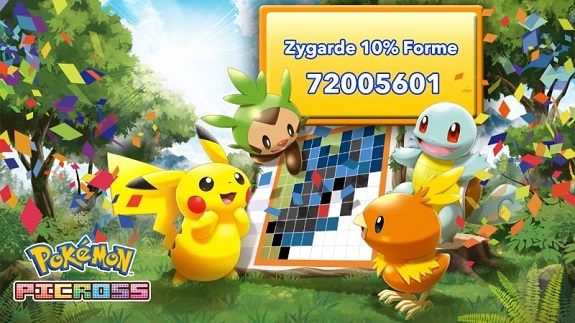