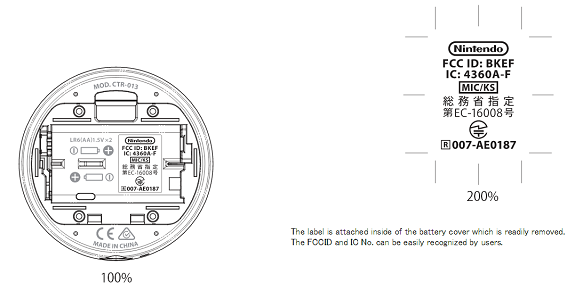 Thanks to FCC filing spotted by ekim, we now know that Nintendo is planning to launch a mysterious “Bluetooth product” for the Nintendo 3DS. Why do we know it’s for the Nintendo 3DS? The codename is a dead giveaway: CTR-013, since CTR is used for products related to the Nintendo 3DS family of consoles (for example, the NFC Adapter is CTR-012).

Unfortunately, we don’t know what this product is supposed to be, but judging by the size (the illustration shows the actual size) and the shape, it may well be a new version of the NFC Adapter. The thing is, there’s no Bluetooth in any of the Nintendo 3DS models, which means this product is meant to be used with another type of device along with the Nintendo 3DS… like smartphones, for example.

After all, NFC readers are not really common on smart devices, and on device they’re included, their use is often restricted (for example, NFC is only used for Apple Pay on iOS, and developers do not have access to any API). A NFC Adapter would allow players to use their amiibo on smart devices, which could be pretty interesting for the upcoming Animal Crossing and Fire Emblem games.

Hopefully, Nintendo makes an announcement for this device soon, but it’s likely we will have to wait a couple of months before finding out what it’s all about.

Source: FCC
Thanks PDALover for the heads up!