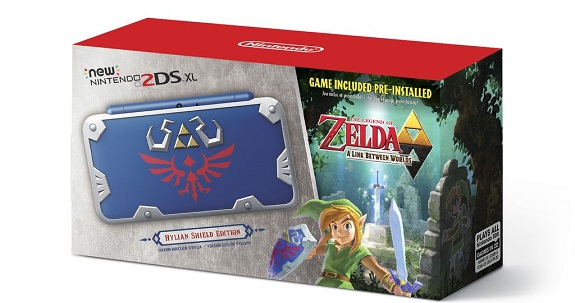 This new bundle will be released on July 2nd, exclusively at GameStop (United States) / EB Games (Canada), and will cost $159.99. Unfortunately, it’s not clear whether this particular New Nintendo 2DS XL will ever be released in Europe or Japan.

The New Nintendo 2DS XL Hylian Shield Edition comes out on July 2nd in North America. The Upcoming Games page has been updated!

Here’s the latest video for the upcoming Octo Expansion:

The latest piece of concept art for Super Mario Odyssey shows the Lochladies, the inhabitants of the Lake Kingdom. The designers made them move really elegantly. Mario certainly seems to find them rather fascinating!

Here’s the preview for the second episode of the Yoiko x Indies webshow, which is about Overcooked: Special Edition and Unepic. It will go live tomorrow (May 31st)!

The latest Party Crash event for ARMS took place last week. It was called “Beef on Beef”, and it was Max Brass vs. Master Mummy. In the end, it’s Max Brass who won, with 51% of wins!