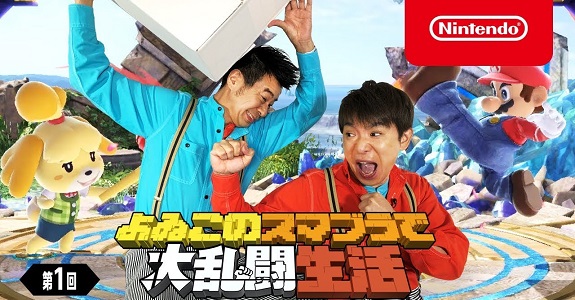 A few months ago, Nintendo collaborated with Yoiko (the comedy duo Shinya Arino of GameCenter CX fame is part of) to create a web series dedicated to Minecraft: Nintendo Switch Edition, with two seasons. Since it was extremely popular (every episode got at least 1 million views, and they are among the most popular videos on Nintendo’s YouTube channel), Nintendo decided to have them take part in a third season.

But this third season is going to be quite different from the others. Indeed, it’s not really a season, and it’s not about Minecraft anymore. Instead, Yoiko are going to play various games, with a fixed number of episodes for each one.

We don’t know how many games will be featured in the show, but they will be revealed later.

The latest series is about Super Smash Bros. Ultimate on Nintendo Switch (out on December 7th worldwide).

The latest series is about Super Mario Party on Nintendo Switch (out on October 5th worldwide), and features two special guests!

The latest series is about Captain Toad: Treasure Tracker on Nintendo Switch and Nintendo 3DS (out on July 13th worldwide).

The next “series” is about various indie games on Nintendo Switch. The titles showcase include Human: Fall Flat, Celeste, Overcooked: Special Edition, and Unepic!