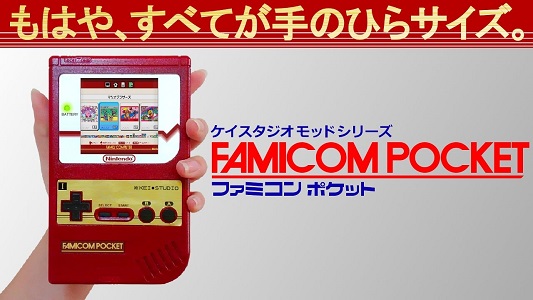 Fans always come up with lots of really neat mods when it comes to consoles, like a handheld GameCube or other interesting, unexpected, and/or totally random mod.

And straight from Japan, we have the Famicom Pocket, a mod for the Nintendo Classic Mini: Family Computer. Basically, the modder took the innards of the Famicom Mini, put them in a GameBoy shell, and voilà!… Well, actually, it’s a bit more complicated than that, especially since the modder even went as far as enabling two player gameplay!

Here’s a video that shows how the Famicom Pocket was created:

If you can read Japanese, the modder has even more details and plenty of pics on his official website: click here to check it out!

Thanks TinyCartridge for the heads up!

Here’s a commercial for Dragon Quest VIII: Journey of the Cursed King, releasing on January 20th in Europe and North America!

In the latest episode of the Jimquisition, Jim Sterling is most… displeased with the Virtual Console service :

Here’s a neat little bit of trivia for Super Mario World: did you know that you could kill the Big Boos simply by sliding down a slope/stairs? You can check out a GIF of that trick over at Supper Mario Broth. This is by no means a new trick that was only recently discovered, but judging by comments online, it looks like many players didn’t know about it!