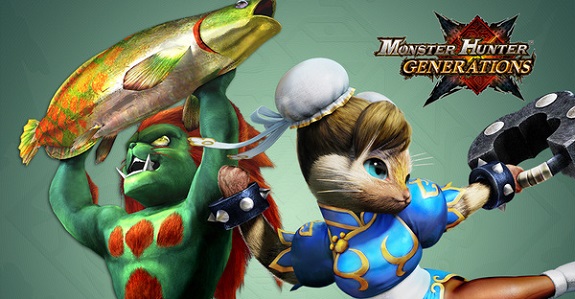 Just like Monster Hunter 4 Ultimate, Monster Hunter Generations is getting the same monthly packs of free DLC. Last month, Capcom release the fourth DLC Pack, which is still available for download. The company previously confirmed that they would be released on the first Friday of each month, up until the beginning of 2017.

Since today is December 2nd, the first Friday of December, that means it’s now time for the 5th DLC Pack! Here’s everything that’s included in this new DLC Pack for Monster Hunter Generations (spoilers: a LOT… again!):

Quest: Evil Descendeth Upon Us
Objective: Slay an Amatsu

Quest: Where Gods Fear to Tread
Objective: Slay an Alatreon

Quest: A Land Draped in Fantasy
Objective: Slay a Kirin

Quest: Not Stepping One Foot…
Objective: Hunt a Hyper Brachydios

Quest: Anything For a Buck
Objective: Hunt a Great Maccao

Quest: Event: Endurance Quest 1
Objective: Slay a Tigrex, a Nargacuga, and a Zinogre

To download all this DLC for Monster Hunter Generations, you have to:

The next DLC Pack will be available on January 6th, and it will be the final one!