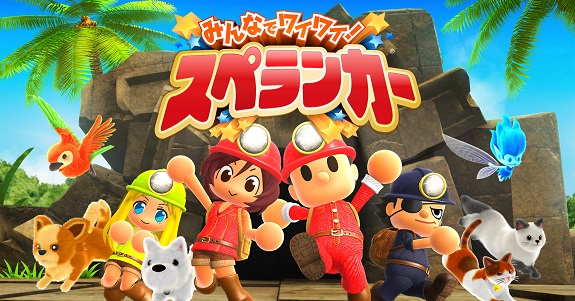 Announced at the Nintendo Switch Presentation 2017, Minna de WaiWai! Spelunker is a platform/action game based on Minna de Spelunker Z. It’s playable with up to 4 players in co-op, either locally (with splitscreen available) or online.

Together (or on your own!), you can go explore various caves in search of treasures. The thing is, said caves are filled with enemies and obstacles, so getting out of them alive with the precious loot is not going to be a walk in the park… or cave, in that case.

Today, Square-Enix uploaded the overview trailer for Minna de WaiWai! Spelunker, which is releasing in exactly two weeks in Japan (on April 20th, to be more precise). If you’ve never heard of that game (or even Minna de Spelunker Z, the game it’s based on), this should hopefully give you a better idea of what to expect!

Also, here’s a commercial for the game:

If that overview trailer and that commercial are not enough for you, and you would like to try the game out for yourself, it’s time to head to the Nintendo eShop.

Square-Enix released a demo today, and it can be download from the Japanese Nintendo eShop or Nintendo’s website (which can be done easily with a Nintendo Account with the country set to Japan, even on a European or North American console: click here for more details!).

Unfortunately, the demo (just like the full game) is only available in Japanese, but it really should not be a problem with this game (besides, it’s just a demo, it’s not like you have to pay for it!). You will need 371MB of free space on your Nintendo Switch or microSD Card to download it.

Finally, here’s some additional details and screenshots from the official gamepage:

Minna de WaiWai! Spelunker (Switch) will be released on April 20th in Japan.