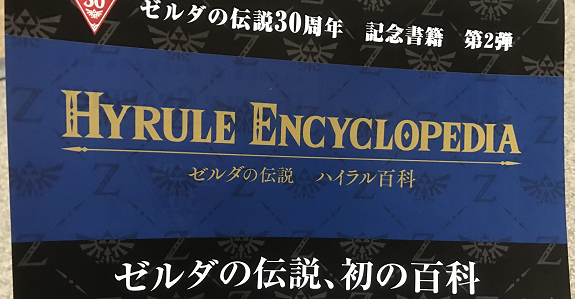 Update: added the cover of the Legend of Zelda: Hyrule Encyclopedia book. You will find it below!

In August, a book called The Legend of Zelda: Hyrule Graphics was released in Japan.

Written by the Nintendo Dream staff (a Japanese magazine dedicated to Nintendo consoles and games), it features hundreds of official artworks from the all the games in the Legend of Zelda series. It will be released in English in February, with a different title: The Legend of Zelda – Art and Artifacts (available for pre-order on Amazon) [NB: affiliate link].

But The Legend of Zelda – Art and Artifacts / Hyrule Graphics is just the first book in a series of three commerative books, celebrating the 30th Anniversary of the Legend of Zelda. You might be wondering what the other two books are about, and when they will be released, and we now have the answer… but only for the second one!

The second book will be called Hyrule Encyclopedia. The pamphlet below gives us two keywords: “Hyrule” and “Master Sword”, and explains that the book will feature many illustrations. It will have three parts:

Hyrule Encyclopedia will be released in February in Japan (the actual release date will most likely not be announced until next year). It’s not clear whether this one will also be released in English, but since The Legend of Zelda: Art and Artifacts will be, there’s no reason this one will not be (fans will most definitely have to be patient, though).