Today, Akihiro Hino shared the latest blog post about the development of Inazuma Eleven Ares. This time again, the focus is on event scenes, and more precisely one where we see Nosaka sitting in a stadium.

Here’s a screenshot from before the game entered the polish phase: 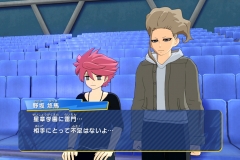 As you can see, he’s not sitting in the same way as in the anime series.

And here’s a screenshot from after the polish phase: 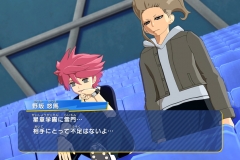 This way of sitting is known as “Emperor sitting” in Japanese, and that’s something Akihiro Hino really wanted to have in the game. However, that’s not something easy to do in 3D. That’s a different story when you’re dealing with 2D animation, but in 3D, you need to make various adjustments so that the position looks alright. You have to adjust the sitting position itself, but also the way the seats are arranged, and the angle of the camera.

With a 3D model, if you try to have the character model rests his feet on the backrest of the front sea, then his waist may look like it’s floating. If you’re having him sit normally, then the feet will not reach the backrest. As such, you need to go through a process of trial and error and make adjustments, so that the whole scene looks right… and then repeat the process for all the other event scenes in the game.

Such a process is also key in order to transcribe the personality of the various characters, as seen in the anime series.