Update: looks like there won’t be any delay for the Golden Mario amiibo after all. Walmart has sent a PR to confirm that the mail sent to some people who pre-ordered the figurine was an error, and that March 20th remains the official release date.

There’s no trouble in the Mushroom Kingdom. Mario Amiibo fans will still see Gold on March 20, 2015. Walmart.com pre-order customers may have seen an incorrect availability date in their account, and we’re in the process of correcting that order information to assure fans that there are no delays.

amiibo releases in North America have always been a bit sketchy: release dates not respected, pre-orders cancelled or delayed, shortages from Day 1… Unfortunately, it doesn’t look like things will improve with the Gold Mario amiibo, that Nintendo officially announced a few weeks ago.

Here’s a screencap received by some fans who pre-ordered the Gold Mario amiibo on the internet : 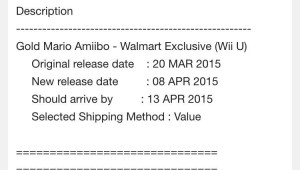 Looks like we’re going to have to wait a few days before we have full confirmation.