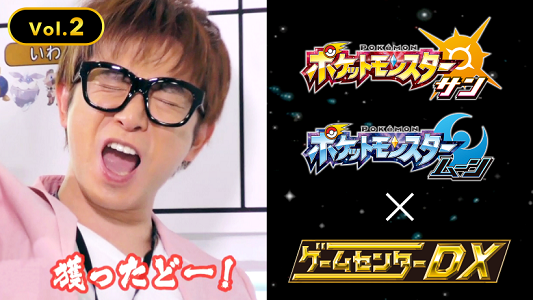 Earlier this year, Nintendo shared some special episodes of GameCenter CX, entirely dedicated to Pokémon Red Version and Pokémon Green Version. There was a total of 5, with the last one being a special episode streamed live on YouTube. If you missed them, simply check out this post for a playlist with all episodes!

And at the very end of the final episode, it was announced that there would also be a special episode of GameCenter DX, this time dedicated to Pokémon Sun and Moon. And it turns out there will be more than just episode, though it’s not clear how many there will be in the end.

But it looks like this GameCenter DX series dedicated to Pokémon Sun and Moon will be much shorter, as Masaru Hamaguchi’s goal is simply to catch a Pokémon from all 18 types… definitely much easier and quicker to complete than catching all 151 Pokémon from the original generation!

Here’s the second episode of the GameCenter DX series dedicated to Pokémon Sun and Moon:

And here’s the playlist with all episodes available:

We will update this post as soon as new episodes are available!

For those who don’t know, GameCenter DX is a spin-off of GameCenter CX, where Masaru Hamaguchi (the other half of comedy duo Shinya Arino is part of) check out recent games from Nintendo. Launched in 2015, this series is a Nintendo exclusive.