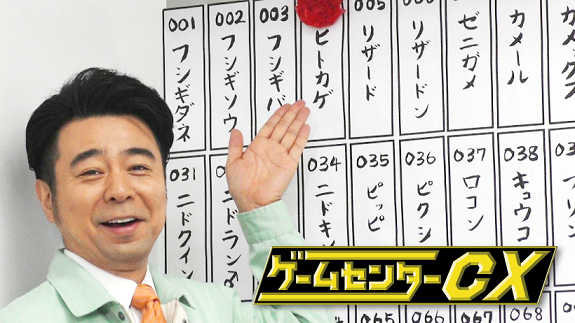 Update: the fifth and final episode of the Game Center CX: Pokémon Red & Green special is now available. You will find it in the YouTube playlist below! Also, do note there will be an episode of GameCenter DX about Pokémon Sun and Moon soon.

GameCenter CX is a popular TV show in Japan (and in the west), featuring Shinya Arino (Kachou) trying to complete various retro games. There’s already been several special episodes commissioned by Nintendo themselves, not to mention the GameCenter DX specials (where new games are played, instead of retro titles).

And today, a new one was uploaded on YouTube by Nintendo, and is part of the Pokémon 20th Anniversary celebrations. In this special episode (to be released in several parts), Arino Kachou is playing Pokémon Red & Green, the original Pokémon games released on February 27th, 1996 in Japan, on GameBoy.

And as you can imagine, his goal isn’t simply to beat the game and call it a day: he’s also trying to catch every single Pokémon. It’s certainly a much easier task than in recent Pokémon games, which not only have several hundreds of Pokémon, but also many more evolution methods than in the original.

What’s more, he’s even giving a unique nickname to every single Pokémon he catches. You can check out his progress, as well as the nicknames of the Pokémon caught, thanks to this (official) Twitter account!

Here’s all the special episodes of GameCenter CX dedicated to Pokémon Red & Green: