A new month means a new Software update for Fire Emblem Heroes! The one for June will bring the game to Ver. 3.6.0, but unfortunately, we know very little about it. The developers did share the usual pre-release notice with details about the update, but it only covers the usual Weapon Refinery… nothing is said about any other additional features and improvements.

But as expected, we got details about the contents of the update during the latest Feh Channel presentation. Make sure to check out this post for the full recap!

This post will be updated as soon as we have more details, and the patch notes will be added to this page when they’re available. 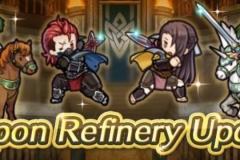 This new update will add the following character-specific weapon skills, learnable at 5 ★:

Of course, you will be able to upgrade those weapon skills in the Weapon Refinery once you have learned them.

Also, the following weapon will be upgradeable:

With this update, the developers are making some adjustments to Aether Raids maps:

Due to those changes,:

For plenty of additional details about this new update, make sure to check out the notice on the official website!

As usual, keep an eye on the Events and Content Updates and Characters page to keep up to date with all that’s happening in Fire Emblem Heroes!