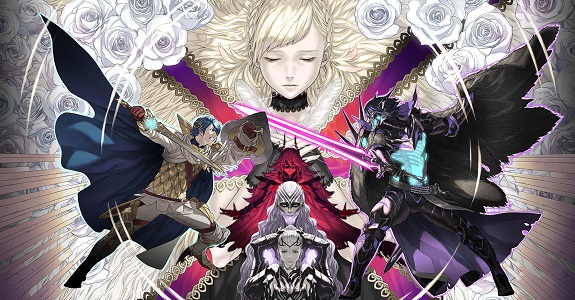 During the latest Feh Channel presentation, more details were shared about Book III of the main story of Fire Emblem Heroes, but also the next Software update for the game releasing later today (Ver. 3.0.0). You can find more details about Ver. 3.0.0 itself in this post!

The story of Book III takes places in a place called The Realm of the Dead. When the forces of Hell invade, it’s up to the Order of Heroes to save the day… or is it?

Here’s some of the new characters appearing in Book III:

Book III of the main story of Fire Emblem Heroes will be available later today, and like Book II, it will already have two chapters available right of the gate. Naturally, more chapters will be added on a regular basis. Don’t worry if you’re yet to clear Book I and/or Book II: you don’t have to clear them to start Book III.

Also, if you clear Chapter 1 of Book III, you will get a new Hero: Eir (Merciful Death)!

By the way, Kozaki Yuusuke has revealed that he’s the one in charge of both chara-design and illustrations for Book III!

But that’s not all… The Feh Channel presentation also shared details about the next Software update, Ver. 3.0.0, releasing today. First, new types of seasons will go live starting December 10th:

alThose work on a different cycle than the usual elements, and more importantly, they have an effect on Aether Raids. They also happen to work in conjunction with new Blessings, that are tied not to Legendary Heroes, but a brand new type of Hero known as Mythic Heroes.

The first Mythical Hero is none other than Eir (Merciful Death), and her Mythical Effect is Light. There will be two ways to get her:

The Hero Fest will include the following Heroes:

More details about that Summoning Focus will be added to this page as soon as they’re available.

Also, a new mechanic related to Summons will be added to the game: First Summon Tickets. They work like the free pull you can get for each new Summoning Focus: it allows you to summon one character without using any Orbs. However, there’s a catch: you cannot stack tickets, as the only way to keep a Summoning session going is to use Orbs. You have to leave the current Summoning session if you want to use another ticket.

Also, First Summon Tickets can only be used during a specific Summoning Focus, and you cannot save them for later.

Starting next month (January), you will be able to get First Summon Tickets as rewards from Forging Bond Events. Speaking of that event, the next one will feature Tibarn (Lord of the Air), a new type of unit that can transform into a beast!