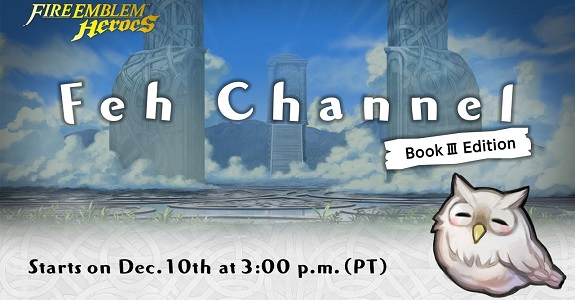 Update: the latest Feh Channel presentation for Fire Emblem Heroes is now over. Check out this post for all the juicy details!

A few weeks ago, Nintendo and Intelligent Systems confirmed that Book III of the main story of Fire Emblem Heroes will start sometime in December. And it looks like its debut is drawing nearer and nearer, as a new Feh Channel presentation has been announced. It’s called Feh Channel: Special Book III Edition, and will share some details about the next story chapter of Fire Emblem Heroes.

The presentation will take place next week, on December 10th / December 11th:

Here’s the livestream (English and Japanese):

According to the developers, the presentation will last about 10 minutes. Alongside Book III, we can can safely expect this Feh Channel to also share details on whatever is in store in Ver. 3.0.0 of Fire Emblem Heroes (alongside the new weapon skills).

Speaking of Ver. 3.0.0, there will be some more maintenance at the same time as the Feh Channel. As usual, you can find more details about it (such as the time in your region) on this page. It’s not clear if that means that the Software update will also be released at that time, but it’s likely that it will.

As usual, check out the Events and Content Updates and Characters pages to keep up to date with all that’s happening in Fire Emblem Heroes!