The Nintendo Switch is definitely a great platform for puzzle game fans, and it’s not going to change anytime soon! Earlier this week, a new puzzle was announced for it: CROSSNIQ+. It’s a “speed-focused, arcade-style puzzle game” said to be inspired by the “y2k-era” visual design, and presented as a “tribute to highly polished, small-scope Japanese games from the late 90’s.” by its developers. It will be released this Summer on Nintendo Switch.

In CROSSNIQ+, the name of the game is re-arranging a grid of tiles to form “crosses” – rows and column of the same color. You can move tiles up, down, left or right – but moving them off the edge of the grid makes them wrap back to the other side, offering a unique and brain-bending challenge that’s been compared to “a match game mixed with a color cube”. Unlike other popular puzzle games, CROSSNIQ+ focuses on speed and technique rather than chains or combos – make crosses quickly and set up multi-crosses to earn bonuses.

In Endless mode, keep making crosses to keep your timer filled – let it hit empty, and your game is over. In Time Attack, your time is a set amount – earn as many points as you can before the buzzer sounds. Play against a friend in Versus, complete with items and special moves… or simply relax to a variety of different, aesthetically striking skins in Chillout mode, where there’s no score, timer, or game overs. No matter your playstyle, there’s a mode in CROSSNIQ+ for you!

Let’s Cross! Aim for THE TOP!!

CROSSNIQ+ (Switch – eShop) comes out this Summer in Europe and North America. The Upcoming Games page has been updated!

Today, a Software update for Cluedo / Clue: The Classic Mystery Game was released. It adds a highly-request feature: Local Multiplayer, which wasn’t possible before due to the need to keep secret clues and notes hidden from other players. In order to resolve this limitation, the developers released a free mobile companion app that can be used as controller, and as clue sheet to make notes in secret. You can also use the Cluedo: the official edition / Clue: the Classic Mystery Game (a paid app).

To play in local multiplayer, you can use any of the following:

The update also adds a new theme: Sherlock. It includes a brand new board setting and nine characters (including Sherlock, Dr Watson, and Moriarty). It’s available for free for owners of the Season Pass, and as paid DLC for everyone else.

Here’s the latest screenshot for Shakedown Hawaii, this time on Nintendo 3DS: 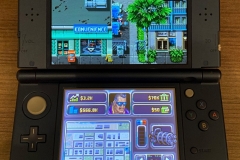