nWay have announced that Power Rangers: Battle for the Grid is to get Season 3, with 3 additional characters, and more.

And here’s what will be included in this 3rd season:

Tcheco in the Castle of Lucio

Fantastico Studio have announced their latest game for the Nintendo Switch: Tcheco in the Castle of Lucio, developed by Marcelo Barbosa.

Tcheco in the Castle of Lucio (Switch – eShop) does not have a release date yet. The Upcoming Games page has been updated!

In just a few days, The Last Faith has been fully funded on Kickstarter: $76 489 have already been pledged as of writing ($54 798). The first stretchgoal has also been reached, and the next one isn’t too far:

More stretchgoals will be revealed at a later date.

Megan Fox has announced that SkateBIRD has been delayed to next year, this time not (directly) due to Covid-19:

We’re not financially imperiled (unlike a lot of my friends in the service industry, yikes – please help where you can, tip well if you’re getting delivery, etc). We’re fine, really. Between the Kickstarter and some platform deals, we’re more than funded through launch. However. The game is taking longer than planned due to normal iteration stuff. For instance, we’re gonna go for a story mode! Like an ACTUAL story mode, not the findable tapes side-story we’d originally planned. Then pile on there that at least my productivity has halved or more because of – you know, everything outside right now? – and it’s best to kick the can down the road.

Click here to check out the latest Kickstarter update for the game!

SkateBIRD (Switch – eShop) comes out in 2021 in Europe and North America. The Upcoming Games page has been updated!

Worker Bee have announced that they will release Widget Satchel in Japan on May 28th. It will cost 1 780 Yen in that region, and this version will offer an English language option.

Widget Satchel (Switch – eShop) comes out on May 28th in Japan. The Upcoming Games page has been updated!

Forever Entertainment have announced that Thief Simulator has now sold over 400 000 units on Nintendo Switch. As always, no regional breakdown is provided. 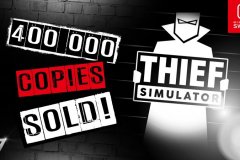