Arc System Works have announced that they are bringing Double Dragon & Kunio-kun Retro Brawler Bundle (known in Japan as Kunio-kun: The World Classics Collection) to Europe and North America on February 20th. This bundles includes no less than 18 games, including 11 that have been localised in English for the very first time ever.

DOUBLE DRAGON & Kunio-kun Retro Brawler Bundle, consists of 18 titles including 7 DOUBLE DRAGON and Kunio-kun vintage games from the 80’s and 90’s, and all 11 Kunio-kun classic titles from the Family Computer Disk System that have been localized into English for the first time ever. Game genres vary from side-scrolling action, beat-’em-up, sports, and action RPG. Online play mode is available for all titles, and a total of 55 in-game missions are waiting for you to obtain nicknames and avatars to show off to your friends! Can you complete all the games? 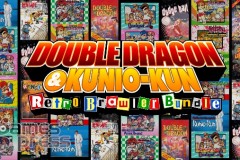 Join Jakob Hansson as he talks you through how he plays Broken Lines and explains the importance of the actions and abilities that he uses.

The latest Software update for Power Rangers: Battle for the Grid (Ver. 2.0.0) was released today. It brings Lobbies, Spectator Mode, and PS4 Crossplay.

Here’s a trailer for this major update:

Clever Endeavour Games have announced that Ultimate Chicken Horse is getting yet another (free!) FortniteContent Update soon. This one will add the following:

Barnaque and Nakana.io have announced that Infini (a psychedelic puzzle-adventure game) will be released in Q2 2020 (instead of Q1 2020 as previously announced). It will cost $11.99, and will be playable in English and French.

Here’s the latest trailer and some more details, along with the list of key features:

In Glimpse of Infini, players will encounter a variety of puzzles, characters, and abilities that Hope will learn on his odd adventure, including the innovative camera manipulation mechanic. Combine his diverse abilities to avoid obstacles, manipulate the environment, and bend your mind to escape Infinity and return Hope to the real world.

The world of Infini is brimming with ambient music, psychedelic imagery, and an outlandish narrative that personifies the concepts of our daily lives. Hope’s adventure is experimental through its gameplay, visuals, and audio design, creating a delicate balance between obscurity and familiarity. While in Infinity, Hope will face more than 100 mind-bending challenges through 10 worlds filled with bizarre personalities and chances to explore the multiverse.

Infini (Switch – eShop) comes out in Q2 2020 in Europe and North America. The Upcoming Games page has been updated!

Here’s the video for the latest event in Fortnite, Love and War: