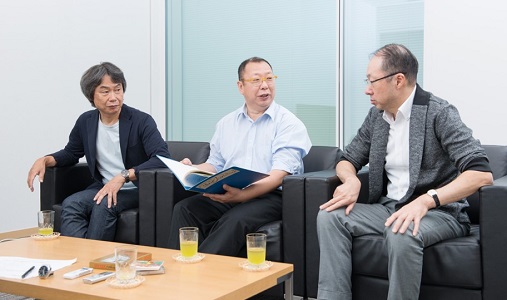 Ahead of the launch of the Nintendo Classic Mini: Family Computer, Nintendo published a series of official interviews with developers of some of the games included in the console. Only available in Japanese at first, they were then translated in English: And last week, the 4th interview was published in English, and it’s about The Legend of Zelda.

In this one, Shigeru Miyamoto, Takashi Tezuka, and Koji Kondo discuss the creation of this classic, which has spawned a 30 year long (and counting!) franchise.

Sao: The opening crawl shows various treasures and items, and then at the end you see Link holding up a sign that says “Please look up the manual for details”.

Sao: Those who play The Legend of Zelda for the first time on the Classic Mini NES may wonder what that means. Would you explain?

Miyamoto: We put in that message because the game included a manual, a sort of booklet. However, some people would use a Famicom Disk Writer Kiosk at game shops to overwrite their games, and we felt they would want some sort of proof that they purchased the game.

Sao: They would be happy to get something tangible instead of just overwriting the data on a disk.

Miyamoto: So we decided to make a booklet with gameplay instructions, story elements to serve as hints, and strategic methods for solving puzzles. We wanted players to read it, so we put in that message saying “Please look up the manual for details”.