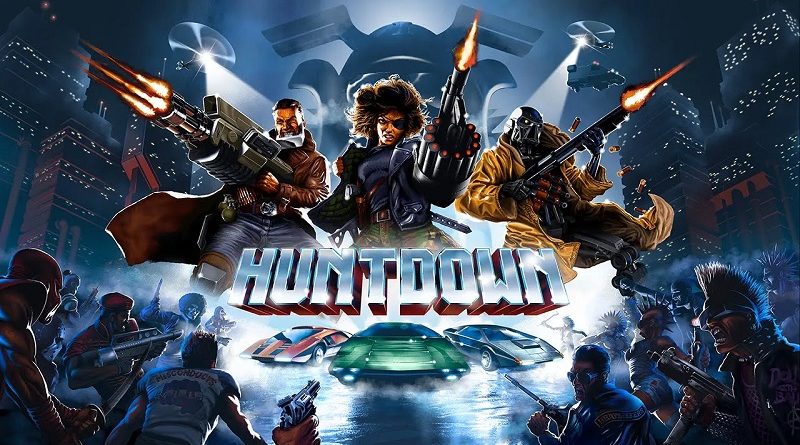 Coffee Stain Studios have announced that Huntdown will be released on May 12th in Europe and North America. It’s now available for pre-purchase on the Nintendo eShop.

The 16-bit platformer offers partners in cleansing crime the option to hunt in pairs with local co-op, or go lone wolf in the mean streets of mayhem. Set in a bleak dystopian future where sadistic gangs rule and cops fear to tread, only three legendary bounty hunters have the arsenal and killer instincts to take back the city from the corrupt fist of felony. Inspired by the action movies and pop culture of the 80s with a gritty, violent twist, Huntdown is an old school arcade side scroller for the modern bounty hunter. The slick platformer features hand painted 16-bit pixel art graphics and hand-drawn animations, combined with fluid action-packed 60-FPS gameplay and an epic 80s soundtrack pumping dark wave, industrial synth, hard rock and electro through 20 unique levels.

Huntdown (Switch – eShop) comes out on May 12th in Europe and North America. The Upcoming Games page has been updated!

Team Reptile have announced that Megabyte Punch will be released on May 8th in Europe and North America. The game is now available for pre-purchase on the Nintendo eShop with a 25% off discount.

Megabyte Punch is an electro beat ‘em up game with platforming elements in which you build your own fighter.

Megabyte Punch (Switch – eShop) comes out on May 8th in Europe and North America. The Upcoming Games page has been updated!

Here’s some livestream recordings for La-Mulana 1 & 2:

Here’s the latest The Download video from Nintendo of America, showcasing some of the most notable games released in April 2020 on the Nintendo eShop of the Nintendo Switch:

The video showcases the following games: