Another week, another game ported to the Nintendo Switch by Ratalaika Games! This time it’s Neon Junctions, a first-person puzzle platformer originally developed by 9 Eyes Studio. It will be released this Friday (May 7th) in Europe and North America, and will cost 4.99€ / £4.99 / $4.99.

Neon Junctions is a First Person Puzzle-Platformer imbued with atmosphere of synthwave and 80s. Plunge into cyberspace and try to overcome 34 levels capable to challenge not only your savvy but also dexterity. Capture and move conductive cubes, close electrical circuits and restore power of the interactive objects around you to get to the teleportation plant which is able to take you to the next level of the game!

Neon Junctions (Switch – eShop) comes out on June 7th in Europe and North America. The Upcoming Games page has been updated!

Good news for those of you who are still waiting for the Nintendo 3DS version of Shakedown Hawaii: development is now pretty much over, and it’s currently undergoing one final bout of testing. If it all goes well, it will be sent to Nintendo for certification later this week! 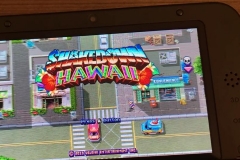 My Friend Pedro (Switch – eShop) comes out this June in Europe and North America.