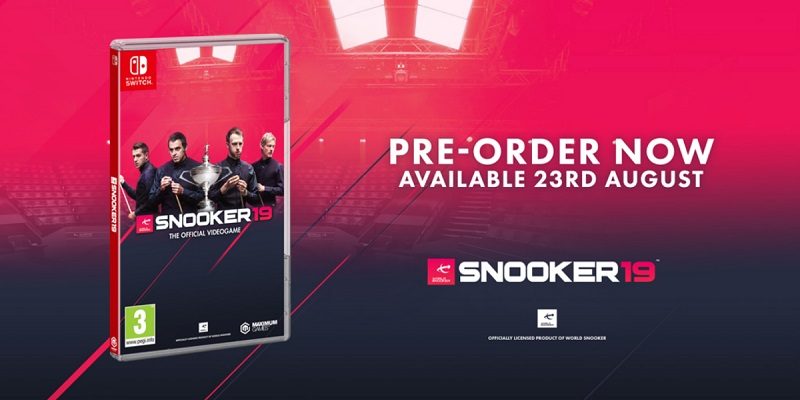 Aksys Games have announced that Spirit Hunter: NG (the second game in the Spirit Hunter series, following Death Mark) will be released on October 10th in Europe and North America.

Spirit Hunter: NG reveals the story of a cursed young man on a life-threatening quest to discover who—or what—is responsible for the disappearance of his little sister. To save her, our protagonist must team up with shady characters, face down spirits of legend, and make difficult decisions that can greatly alter the outcome of the game. Can you save your sister and stop evil from destroying all that you hold dear? Or will you find yourself just another victim of an angry spirit?

Spirit Hunter: NG (Switch) comes out on October 10th in Europe and North America. The Upcoming Games page has been updated!

Ripstone Games have announced that Snooker 19, developed in collaboration with Lab42 and World Snooker, will be released on August 23rd in Europe and North America. It’s now available for pre-purchase on the Nintendo eShop, and costs 34.99€ / £29.99.

Developed by Leamington Spa based Lab42, Snooker 19 features 128 of the world’s top players including Ronnie O’Sullivan, Judd Trump, Mark Selby and Ding Junhui as they take to the table at iconic venues including The Crucible and Alexandra Palace in countries across the world including China, and Germany. As the most in-depth simulation of snooker ever, players compete in every major tournament culminating with the World Championship in Sheffield, either in the robust single-player mode, local or online multiplayer options.

Snooker 19 features a full TV-style presentation, alongside evocative visual details of the players, arenas and equipment. Player likenesses have been meticulously created using 3D facial scanning technology while the subtle yet detailed wood grain of the cues and tables is rendered impeccably. With the glare of the spotlights reflecting accurately off the polished balls, Snooker 19 sets a new visual standard for the snooker video game. Players can soak up its atmosphere while the advanced physics and AI engines ensure the action remains tense, thrilling, and most importantly, true to real life.

Snooker 19 (Switch) comes out on August 23rd in Europe and North America. The Upcoming Games page has been updated!

This brand-new story, featuring Gaul’s most famous duo, starts in a small village, in Armorica. Everybody is enjoying the quiet life, until the druid Getafix receives a strange letter which will lead Asterix and Obelix on a unique treasure hunt they aren’t ready to forget (and the Romans camps either!). They’ll travel with the mysterious crystal menhir to distant lands, filled with new and unparalleled dangers.

Asterix & Obelix XXL3: The Crystal Menhir offers comprehensive content which will delight fans of all ages. Battle, Exploration, Puzzle and Collection: the game has plenty of options for action! Complete multiple side quests and demonstrate your curiosity as you collect hidden objects to become a true Gaul. And for the very first time in the Asterix & Obelix XXL saga, a cooperative mode will be available! Play with family or friends on the same screen: Asterix and Obelix’s actions will be complementary and the two heroes will play together as they make their way through the game, for always more fun!

In Asterix & Obelix XXL3: The Crystal Menhir, you’ll obviously find all your favorite Gauls, including Getafix, Cacofonix and Vitalstatistix, along with new characters created for the game: the more the merrier! So, are you ready to go on an adventure and to take on the Roman legions?