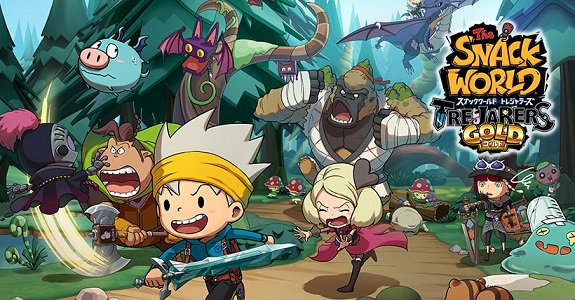 Today’s Daily Briefs: Runner3 development is now over, but also…

After many weeks of complete silence, Choice Provisions finally posted the latest devblog post for Runner3 last week. And this one has some pretty big news: development is now over, and the game has been sent to Nintendo for lotcheck. Once it’s passed that, it will be sent to the manufacturer for printing. In other words: Choice Provisions will soon be able to announce the release date of the game!

While we wait for more details, here’s some additional screenshots for the game:

You can check out the full devblog post by clicking here!

Runner3 (Switch) does not have a release date yet.

It will be released on April 12th in Japan, and will feature enhanced graphics, as well as an improved battle system and “action motions”. As expected, this Nintendo Switch version of the game will also include the two DLC Packs originally released for the Nintendo 3DS version of the game. Finally, first-print copies of the game at retail will include a Crystal Sword Z – α toy.

The Snack World: Trejarers Gold (Switch) comes out on April 12th in Japan. The Upcoming Games page has been updated!

Last week, Arc System Works shared some additional details about the western release of BlazBlue Cross Tag Battle. First, the company revealed that the game would have a full English dub (along with the Japanese one).

Also, we have the price for the various editions and the DLC:

Here’s a trailer and pictures for the first DLC pack (the one that’s free at launch):

Last week, Wired Productions announced that they had partnered with Saber Interactive in order to release Shaq Fu: A Legend Reborn at retail, later this Spring. Here’s all you need to know about it:

Players take on the role of the unstoppable Shaquille O’Neal as he fights his way through the hordes of Hell & Hollywood! We’ll be sharing a brand new trailer and the release date very soon and are sooo excited to team up with Shaq and Saber to retell the story of Shaq Fu and correct a legacy the 90’s wasn’t ready for!

Defeat dozens of enemies, as Shaq learns new moves, travels to unique locations and battles the legions of the damned. At the end of each journey, Shaq must face down a powerful boss ripped straight from tabloid headlines and bent on our destruction.

Will he triumph? Of course, he will… It’s Shaq.

Shaq Fu: A Legend Reborn (Switch) comes out this Spring in Europe and North America. The Upcoming Games page has been updated!

A few days ago, THQ Nordic announced that Legend of Kay Anniversary was headed to the Nintendo Switch this very year, at retail and on the Nintendo eShop. Here’s all you need to know about it:

Full of fond allusions to old martial arts films and pop culture quotes, Legend of Kay – Anniversary is both an incredibly funny game and a challenging action-adventure for young and old alike.

Legend of Kay Anniversary (Switch) comes out later this year in Europe and North America. The Upcoming Games page has been updated!

A few days ago, during the first Hello Switch presentation, tinyBuild announced that Hello Neighbor was headed to the Nintendo Switch later this year, on the Nintendo eShop and at retail. It will cost $34.99, and include all future content udpates.

Sneak into your creepy neighbor’s house to find out what he’s hiding in the basement. hello Neighbor is a stealth horror game that’s coming to Nintendo Switch (digital & retail) this year.

Hello Neighbor (Switch) comes out later this year in Europe and North America. The Upcoming Games page has been updated!

Here’s the latest set of screenshots for Attack on Titan 2:

Attack on Titan 2 (Switch) comes out on March 15th in Japan, and March 20th in Europe and North America.

Today, Gfk-Chart Track reported that thanks to a price cut, sales of the Nintendo Switch version of FIFA 18 jumped by 494%.

A funny and somewhat impressive stat that’s ultimately worthless without any concrete data to back it. After all, +494% would be a lot less impressive if the game sold 100 units the previous week, than if it had sold 1 000 units… especially as the PlayStation 4 remained the best-selling version that week.