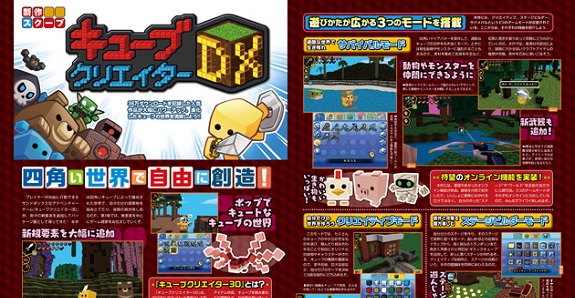 Cube Creator 3D is a Minecraft clone developed by Big John Games. That unassuming game totally changed the fate of the company, thanks to its great sales in Japan. It even landed them a meeting with Nintendo, who seemed interested in them bringing Cube Creator to the Nintendo Switch (click here to learn more about that).

And today, in the latest batch of previews from Famitsu magazine, it was revealed that Cube Creator DX would be released later this year in Japan. Developed by Arc System Works for Japan, this version will feature quite a lot of brand new content and features.

First, here’s the three game modes that will be available:

Finally, Famitsu reveals that Cube Creator DX will include a highly-requested feature… online play! Players will be able to create things together, but also publish their own worlds and stages.

Development is 85% complete, and the release date has been set to April 27th. And perhaps even more importantly, Cube Creator DX will also be released at retail, though that version will obviously be more expansive:

Here’s the very first screenshots for the game:

Cube Creator DX (3DS) comes out on April 27th in Japan. The Upcoming Releases page has been updated.