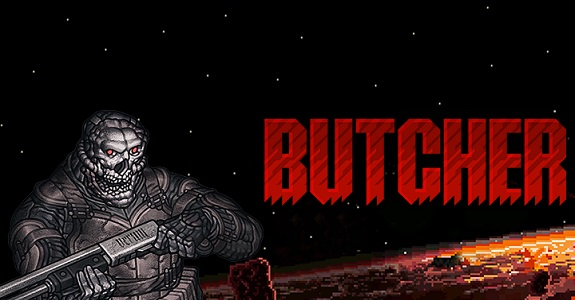 The European Nintendo eShop of the Nintendo Switch is at it again, revealing games before they’re even announced. This time, the “victim” is a game called Butcher. Developed by Transhuman Design (Soldat, King Arthur’s Gold), it’s a fast-paced 2D shooter, and a pretty bloody one to boot… no surprise, with such a title (which does not refer to the person providing you with delicious meat)!

In this game, you get to play as a cyborg programmed to eradicate the last remains of humanity. Your sole purpose is simple: annihilate everything that moves. There, we said it was simple! To slaughter your opponents, you can use various weapons such as a shotgun or a grenade launcher. If you want to stay true to the title of, you can use a chainsaw if you prefer.

Of course, you can also get creative by pushing opponents into lava pits, hooks, giant saws… there’s plenty of ways to kill enemies, but also plenty of ways for you to die!

Butcher (Switch) does not have a release date yet, but it’s already been added to the Upcoming Games page!