Miitomo is the very first game Nintendo ever released on mobile devices, and at first, it seemed to be quite successful with several million downloads in a matter of weeks. But after the initial weeks, interest in the game melted like snow under the scorching summer sun, and nowadays, Miitomo looks more like a ghost town than anything… and without the ghosts.

Even Nintendo doesn’t really believe in the game anymore, since it’s been months since last major event. The last update is from April, and the one with actual new features is even older (February). That wouldn’t be unexpected for a game on a “traditional platform”, but on mobile, months without any updates is a clear sign the developers/publisher do not deem it worthwile to continue its development.

But how many times has Miitomo been downloaded since launch? It’s hard to say, due to a lack of concrete data on iOS. A few months ago, Tatsumi Kimishima explained that Miitomo was nearing 20 million downloads (Android + iOS), but that’s not really relevant anymore.

On Android, the game recently passed the 10 million downloads milestone, according to the stat displayed on the official app page on the Play Store. Unfortunately, all we have is a pretty vague range: Miitomo has been downloaded between 10 million and 50 million times. 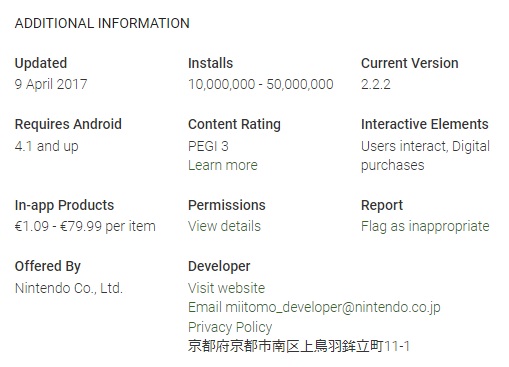 Unfortunately, it’s highly unlikely it will ever reach 50 million downloads, unless Nintendo attempts to reboot it. However, this would most likely be a waste of resources, as Miitomo is not and should not be a priority… not when only 2 of the 5 first mobiles games originally slated for a Fiscal Year 2016-17 release (before April 1st 2017) have effectively been released.

Also, it’s hard to say exactly how many of the 10 million downloads are from users still actively using the app, but given Nintendo’s lack of interest for it, there’s no doubt the vast majority have already uninstalled it.