Bravely Second: End Layer comes out on April 26th in Japan, and it will get several early purchase bonuses. The first one was actually announced a few weeks ago: a bunch of special costumes for the 4 main characters of the game (Edea Lee, Yuu, Magnolia Arch and Tiz Arrior), that players can get by uploading their save data on the Square-Enix members website before May 31st.

The second early purchase bonus works the same way: players need to upload their save data on the Square-Enix members website before May 31st. The bonus is a special weapon (a cane), which has the ability Aspir (which allows you to absorb enemy MP with each attack).

Here’s some visuals of the early purchase bonuses:

Square-Enix also announced a special collaboration with the 3DS version of Kaku-San-Sei Million Arthur. Players need, once again, to upload their save data on the Square-Enix members website, but this time with the Bravely Second: End Layer demo’s data. A code will then be sent via email, and players will need to use it before May 31st. In doing so, they can get their hands on a very special card of Agnès Oblige for Kaku-San-Sei Million Arthur.

Here’s a visual of the card itself: 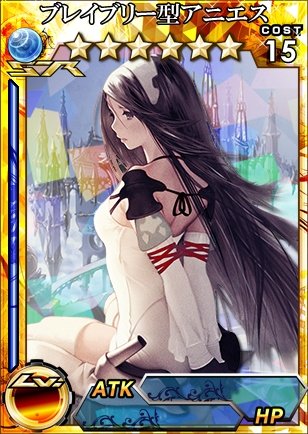 Finally, here’s a new trailer for… Bravely Default, which showcase the various events of this game. If you haven’t played it, or not completed it just yet, you should avoid it as it contains spoilers!