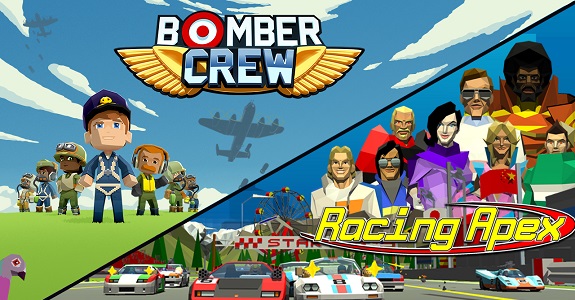 A few days ago, Curve Digital announced that Human: Fall Flat, The Flame in the Flood, and A Knight’s Quest were all headed to the Nintendo Switch. If you tought the publisher was done with Nintendo Switch announcements for a while, well… you were wrong! They announced a new one yesterday, on the first day of gamescom 2017: Bomber Crew, developed by Runner Duck Games.

As the name implies, Bomber Crew is a strategy simulation game, that has you manage a bomber and its crew, in order to allow them to carry their mission without dying. And dying is something you want to avoid at all costs, because this game features perma-death!

Of course, this is going to be way easier said than done, as you will need to go deep behind enemy lines in order to destroy their most coveted assets. Flak guns, enemy radar, Ace Pilots, oxygen levels, and even the weather are among the many things you will have to take into account while carrying your mission. Every single one of them is a high-risk expedition, with perilous dangers waiting at every turn.

They key to a successful mission is to be prepared. For example, you can tag enemy fighters before they reach you, carefully marked your destination on the map, and obviously, make sure you have the right team for the job.

Everything is procedurally-generated when it comes to your crew: the skills, the back stories, and even the very name of the crew members is randomised! That way, you will get a unique experience every time you play. As for the strategy elements, Bomber Crew tasks you with managing everything: fuel, ammo, hydraulics, and more.

Here’s a trailer and some screenshots for Bomber Crew (NB: PC version):

Also, Curve Digital announced Racing Apex, an adrenaline fuelled racer from Lucky Mountain Games. The game isn’t 100% confirmed for Nintendo Switch yet, just for PC and “consoles” (but given the publisher’s interest for the Nintendo Switch, it would be surprising if it wasn’t coming!

Here’s what Racing Apex is all about:

Inspired by the look and feel of classic arcade racers, Racing Apex combines fast paced driving action alongside vehicular combat with a multitude of weapons to destroy the enemy before they reach the finish line. Players will race in a variety of race modes, including both local and online multiplayer.

Bomber Crew (Switch – eShop) does not have a release date yet, but it’s already been added to the Upcoming Games page!