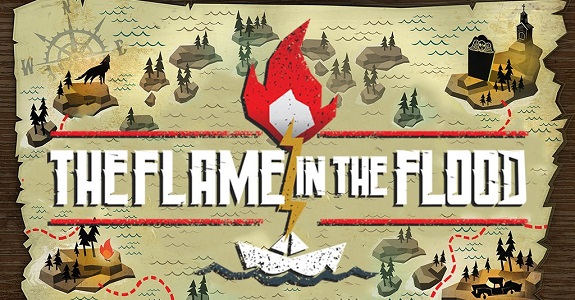 Yesterday, Curve Digital announced not one, but two games for the Nintendo Switch. The first one is The Flame in the Flood (that’s what this post is about!), and the second one is Human: Fall Flat (you can get more details about it in this post).

Developed by The Molasses Flood and puyblished by Curve Digital, The Flame in the Flood is described as a “rogue-lite river journey through the backwaters of a forgotten post-societal America”. In this game, you get to travel down a procedurally-generated river by foot and by raft.

To survive, you need to scrounge for resources, craft tools, remedy afflictions, evade the vicious widlife (and doesn’t care much about your own survival!), and more. But most importantly, what you absolutely need to do is to stay ahead of the coming rains.

The Flame in the Flood features an original full length soundtrack by Chuck Ragan (acclaimed Alt-Country rocker), featuring The Camaraderie, The Fearless Kin, and other special guests. For those of you who are interested, the single of the main theme (heard in the trailer below) is available on iTunes!

Here’s a trailer and some screenshots for The Flame in the Flood:

For those who never heard of The Molasses Flood, it’s a team made of the Art Director of BioShock, as well as developers who worked on BioShock, Halo, Guitar Hero, Rock Band, and more.

The Flame in the Flood (Switch – eShop) will be released in October in Europe and North America, and will be playable at gamescom later this month. The Upcoming Games page has been updated!