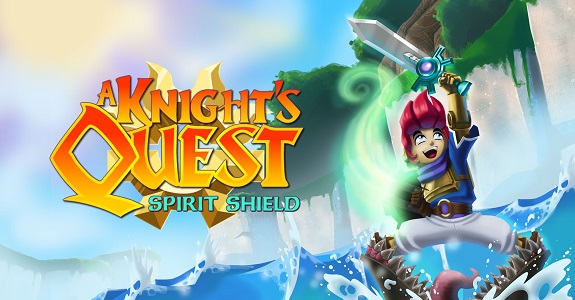 Last week, Curve Studios announced two games for the Nintendo Switch: The Flame in the Flood and Human: Fall Flat. But it turns out there was a third one… A Knight’s Quest. For those who never heard of the game, it’s an action-adventure-RPG inspired by The Legend of Zelda and Metroid, with an emphasis on humour, exploration, and combat.

In this game, you get to play as Rusty (no, not that one!), described as a bold yet clumsy adventurer. The very reason he’s going on a journey is to set things right. What kind of things, you ask? Oh, he just released an ancient evil into the land, nothing too important.

Rusty can use a mysterious shield, which is more awesome than mysterious: it allows him to separate his spirit from his body to solve puzzle, but also gain access to new areas, and combat spectral enemies. See? Told you that shield was awesome!

Just like in a traditional Zelda game, you discover new items and abilities, and those change the way you interact with the world. There’s also various skills to upgrade, and for those of you who like to adventure their own way, you can choose whichever weapons suit your play style. Finally, the developers mention NPC conversations, that use a “full dialogue system”.

Here’s a video and some pictures for A Knight’s Adventure (though not from the Nintendo Switch version):

A Knight’s Quest (Switch – eShop) does not have a release date yet, but it’s already been added to the Upcoming Games page!